Use Of Gemstones As An Element Of Jewelry Design

The colorful and mesmerising world of gemstone plays a vital role in enhancing the beauty of a Jewelry since ancient times. Their unique features, growth patterns, beliefs, vibrancy, colors, and lustre bore the ability to be used to enhance the beauty of the jewelry design. Let us now understand how gemstones can be used in different ways as an element of design.

Gemstone as a Color:

Gemstone as a color enhance the look of the design, which would otherwise look much simpler and monotonous without the colored stone. These gemstones come in hundreds of colors as well as mixed color shades. Most common yet effectively used in fine jewelry as Centre piece or as a color drops in neck pieces.

Role of gem as a color:

The Hall sapphire & diamond necklace.
Here, Blue sapphire is used to break the monotony of the white diamonds and also as a highlighting element at the centre of each motif.

Several colored gemstones give rise to beautiful natural optical phenomena due to reflection of light, dispersion, diffraction and so on. For instance, Opals show a play of color, Cat’s eye effect in Chrysoberyl, Quartz and others, star effect in Rubies among others, color-changing gemstones like Alexandrites and labradorescence phenomena in Labradorites. These phenomena make the jewelry look unique.
In the below image, despite using basic geometric shapes, the jewelry has an element of surprise due to the optical phenomena. 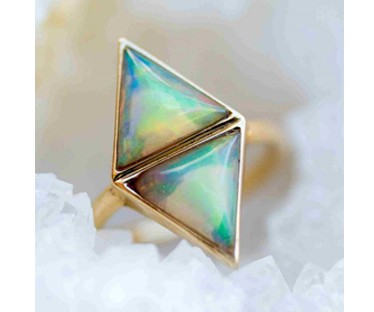 Play of color in Opal

Gemstone as a value

During the era of kings & queens, most royal families used big sized precious stone on their weapons, throne, crown, jewelry, treasures and so on as a status symbol. Some precious stone jewelry are sold as antiques and bought by collectors at an exorbitant value.

Fine jewelry, bridal jewelry, etc. are also found using precious gems in traditional jewelry. The gem placement in these jewelry often complete the look alongside the placing of diamonds.

Gemstone as a form

A lot of times the gemstones are itself used as a form of design. 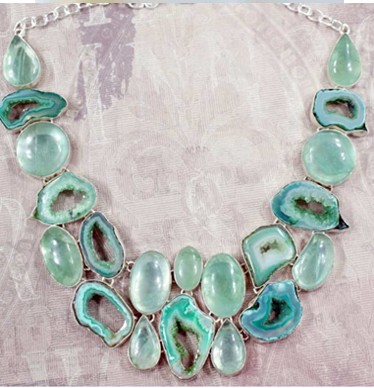 Apatite and Agates. Agates are in the rough form.

2. Carvings: Carvings made on these stones due to varying hardness & toughness of gemstones: Gemstones are carved into idols of God, Goddesses, images of kings & queens, animal figures to showcase the stone’s unique appearance. 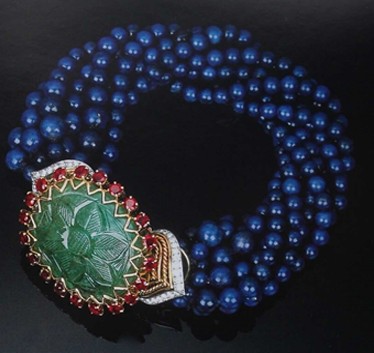 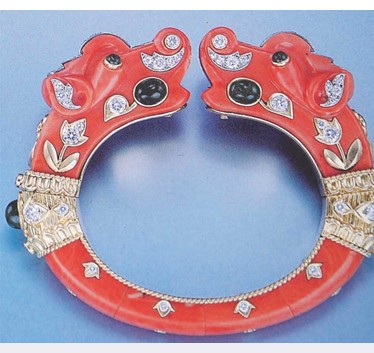 The entire raw coral is carved into a bracelet.

3. Fancy cuts or shapes: These shapes stand out in jewelry and are commonly used to support the design.

The fancy shape of white mother of pearl and quartz.
(Courtesy: jewelry.diamondanddesign.com)

OTHER USES OF GEMSTONES

We have seen a significant increase in the usage of gemstones for fashion jewelry due to multi colored, bold, matching or contrast colored semi-precious stones being available in abundance. Few examples are Quartz, Turquoise, Tourmaline, Garnet and a hundred others.

Semiprecious stones are often available in big sizes, colours, textures, special optical effects etc. These are varying in colors that match different outfits, enable buyers to own a much varied collection of designs suiting different occasions as its slightly lower in cost.

Gemstones with inclusions (defects) in jewelry

Inclusions, formed due to different minerals present inside the stones during the process of crystal formation make the gemstones unique. Hence no two stones are perfectly identical adding to the rarity of the gemstone. For instance, rutile needles in rutilated quartz.

Gemstone use in Astrology

The gemstone used in healing

Different crystal Healing practices are commonly followed creating a larger audience for gem dealers. For instance, healing different chakras, healing as per illness and so on.
All said and done, the above shows several opportunities in the gem industry with multiple uses of these beautiful gifts by nature as well as the creative opportunity of utilising them as elements in jewelry design.